Most of the instrument’s that we use, are handcrafted and built by ourself. We have a passion for redesigning technology and materials that we find interesting. On this page we will present some of the instruments and stage setups that we have used in our productions.

Wohoo – finally we made the move and upgraded the Cubes to version 2.0
We have been thinking about this for a long time, and it took some tithinkingme to get the idea behind the design right. In this 3 episode mini serie we walk you through the building process of the first foldable Cube.

This is the setup we use mostly these days. Two clean looking cubes, with a midi-controller on top. The cubes are used as video-mapped surfaces, where moving graphics synced to the music are shown. We had been working with midi controllers for a long time, but always thought something was missing. In the studio it’s fine to sit at a table and just tweaking knobs, but as soon as you go on stage that is just not enough.

When performing live, the audience is there to watch the artist actually perform and express their music. That is really important for us, and we started to visual an instrument that could generate visuals as well.

Our previous instruments have been very much about using technology with sensors, cameras, and other equioment. There has always been a lot of cables from the instruments visual on stage, just like most artists and bands. This time, we wanted to create a really clean look and apearence on stage, where no technology should be visible. You should only se these 2 clean, white cubes that we where using as instruments. We even covered the top of the cubes with a white fabric, so that the midi controllers not should distract the clean look of the cubes.

The first live-performance we did with cubes where at the PUSH festival. At that time, we used gobos from the moving lights to project shapes and color on the cubes.

We kept developing the visual aspect, and started working with video mapping on the cubes. That gave us a real boost, when we where able to actually synch the graphics on the cubes to what we where playing. That was a huge step to make an interesting live-setup that could express our artistic ideas.

What the audience don’t notice when watching this clean look of the cubes and no visual technology, is the fact the the setup gets pretty complex to achive what we want.

Built out of 20 long springs from shoetree’s makes this an instrument that we are able to play very physical by hitting the shoe block’s to trigger notes. This is the setup we use mostly these days. Two clean looking cubes, with a midi-controller on top. The cubes are used as video-mapped surfaces, where moving graphics synced to the music are shown.

Voxotron – was the first instrument that we built for Moneeo. When we started the building process, the idea was completely different. But when we found these yellow draining pipe, and heard that amazing resonance it created we were just blown away.

We just loved the look of that yellow pipe, and decided that it should take an architectural form on stage. When putting a blue led light strip inside the pipe, the Voxotron appeared to be a grren lightning structure that we found really attractive and had the expression we wanted Moneeo to have. It was the perfect first instrument for our newly formed duo called Moneeo.

The way Voxotron is designed is a bit unusual as an instrument and it gave us the opportunity to be as expressive as we wanted. In the beginning of the pipe, there is a microphone that we sing in to. The ginal from the microphone is going in to an effect processor, that is modulating the sound with a combination of pitch shifters and delays, that are modulated to create a moving drone sound.. The processed signal goes to an amplifier and then to a small speaker that is connected in the biginning of the pipe, near the microphone. The processed sound from the speaker travels through the pipe, wich are shaping the sound with its own resonance. When the sound is leaving the end of the pipe, there is a microphone picking it up, and sent to the PA for the audience.

One of our first built instrument that took more than a year to complete. It was well worth the time, since we have had the idea for a long time, and finally we got the perform with it. 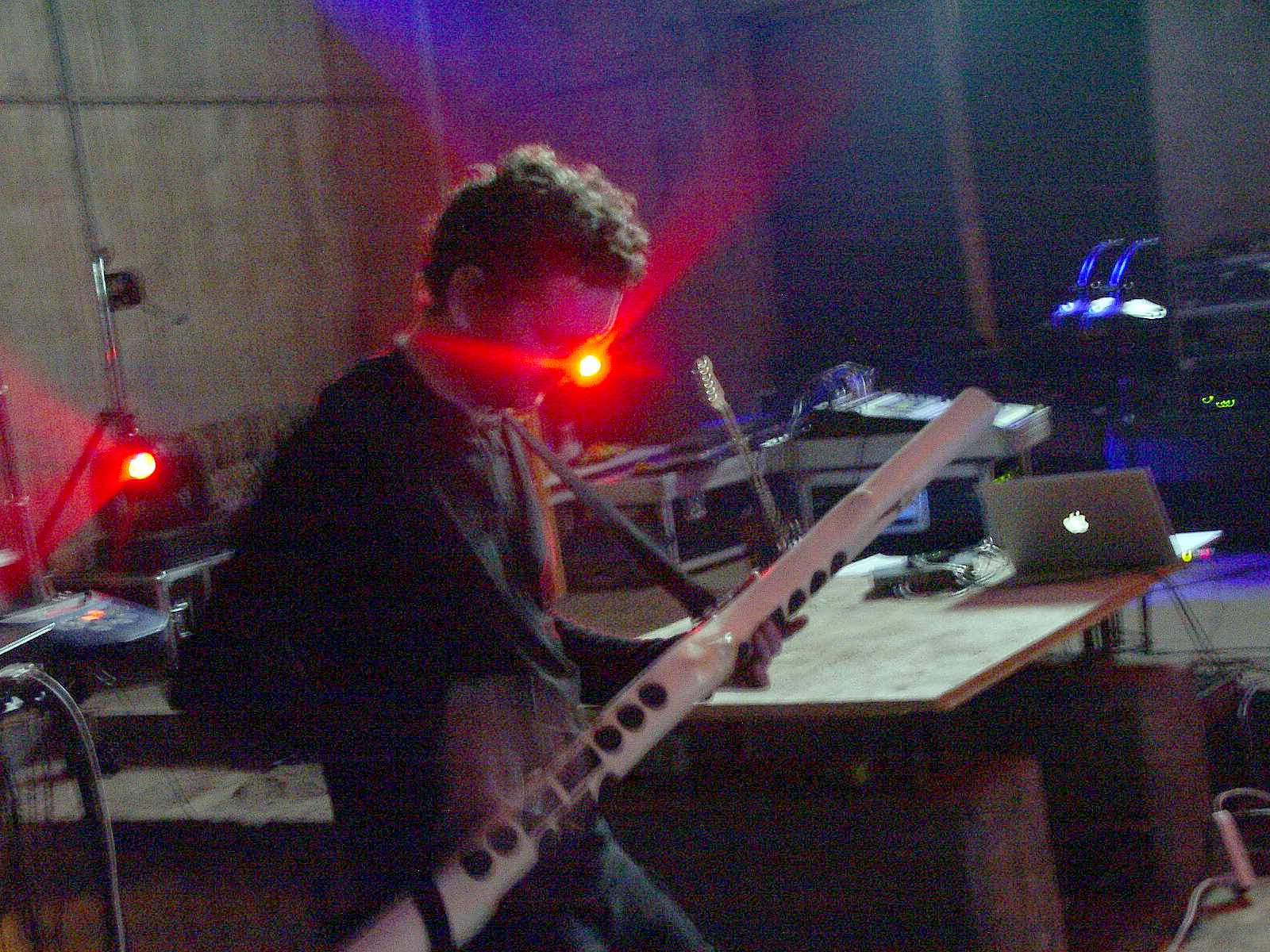 As a former drummer, i (Per) wanted some kind of electronic percussion setup that would give me the same freedom on stage, as guitarist have. It turned out to be an instrument that i wear like a guitar, and have almost the same positions with my hands. That idea felt so naturally.

A couple of years earlier, i had built my own electronic drum set, to be able to record midi-tracks of drum playing, for Steinbergs first virtual drummer, called Groove Agent, invented by the amazing musician and thinker Sven Bornemark. I learned a lot from theses builds, and now i used that knowledge to make a completely new instrument, the slapstick.